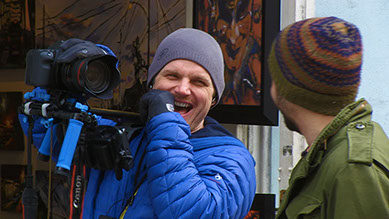 Adam began his career with a documentary about his childhood entitled PUT THE CAMERA ON ME, which was profiled on This American Life and remains one of their most popular segments. He co-wrote, directed and edited FINDING KRAFTLAND, which won 19 awards and played 80 film festivals.

In addition to film making Adam is also a co-founder of Parent Planet, an app based communication and scheduling system for parents, schools and extra cirrucular activities.

Nicholas graduated from Emerson College with a focus in music production, but somehow wound up behind the camera and at the edit bay. He was the co-star of Adam's last documentary, FINDING KRAFTLAND.

Nicholas is now the Director of Audience Development at li.st, a social network built around the creating and sharing lists.

Pursuing Happiness would not exist without the financial support of our wonderful Kickstarter Backers.

Their support, enthusiasm, encouragement, and referrals fueled this project - we are truly grateful.